Character and charm combined with mod cons and style 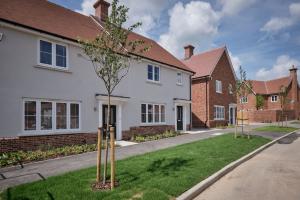 Character and charm combined with mod cons and style

Having lived in an old house with wooden beams, character features and a few spiders and cobwebs, Sally had her reservations about buying new. However, on viewing Coggeshall West, a boutique development of just 29 three- four- and five-bedroom houses, she was pleasantly surprised by the character created in these stunning new homes.

Located in one of the oldest town’s in Essex, Coggeshall has a village feel, which makes it rare to find a development of new homes. Combining contemporary design, smart technology and sensitive architecture to its surroundings, Coggeshall West is built by multi-award winning and local housebuilder, Higgins Homes.

“Now my three children have grown up and left home, I wanted to downsize and thought that a new build would be a modern and convenient option,” says Sally. “I was a little concerned that a new build wouldn’t have the same charm as an older house but at Coggeshall West, the development is full of character with the houses offering great design, good proportions, front gardens and general kerb appeal. I love that the rooms are beautifully light with big windows. Even if the room is east facing, there is still lots of lovely natural sunlight coming through. The whole development has been created in such a way that each home has plenty of space around it, which helps to give it an established feel, which is in keeping with the village of Coggeshall.”

Sally’s new three-bedroom property boasts all the modern conveniences to make life that bit easier, which includes stylish interior design with the use of smart technology. Some of the features include a contemporary ROK kitchen with its Bosch oven, washer/dryer, dishwasher and fridge/freezer through to contemporary bathrooms and en suites.

“There are plenty of bathrooms and space although it doesn’t feel to vast so won’t be difficult to maintain,” adds Sally. “Even getting the WIFI installed was easy because there is pre wiring already in place.”

Although Sally works part-time in a family owned business, she has been thinking about retirement and wanted to establish herself in an area where she could become part of the local community. “I really liked the idea of living in a village but it was important to me that I wasn’t isolated and I could walk everywhere for the shops, cafes and restaurants,” says Sally. “It’s just an eight or nine minute stroll into the village and I’ve already visited a few of the pubs and restaurants when my children came over. I’ve also got a bike so hoping to enjoy some of the local countryside too.”

Although the tranquility of village life was appealing to Sally, being connected to be able to travel further afield was still important. “This area is quite unique in that although it has lots of lovely countryside surrounding the development, it is still well connected for travel by road or rail.”

Coggeshall West is located in a semi-rural setting surrounded by listed buildings together with the convenience of being within easy access to major cities. This picturesque and historic market town in Essex, eight miles to the east of Braintree, remains totally unspoilt with its attractive centre made up of nearly 200 listed buildings.

To commute into London, the train takes you into London Liverpool Street in only 53 minutes. The A12 provides a direct link right to the centre of London and out to the coast of East Anglia. The M11 offers you a quick route to the M25 and the national motorway network. Stansted is the nearest airport, less than half an hour by car.

Although Sally has moved through the Covid pandemic, she didn’t experience any difficulties as she explains: “The staff at Higgins Homes have been marvelous and I feel really lucky that I’ve found Coggeshall West,” says Sally. “Now that I’ve moved in, the Higgins Homes staff have continued to be respectful even though there is still some building work going on at the site. It is all incredibly well organised and everyone has been so lovely throughout the whole process.”

You can view the development here.