The Most Haunted Places in the UK 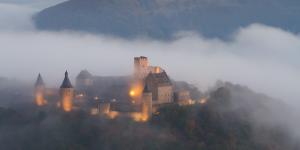 The Most Haunted Places in the UK

Linked to the witch trials of 1612, Pendle Hill is an infamous location known for its links to witchcraft. It’s widely known to have been the home of the Pendle Witches, who were known for residing in a tower in the area, and were accused of causing pain, disease, and death within the local village. Nowadays, the area is popular for witch walks, where you can explore the village, visit the haunted properties and climb up Pendle Hill.

Every year on Halloween, visitors come from miles around to hopefully get a peek at the ghostly goings on - Most Haunted even went live at the location on Halloween in 2004, stating it was their scariest episode! It is definitely thought to be one of the most haunted places in Britain.

Home to The Blue Lady, this derelict castle has been left in ruins since the 18th century, where previously it had been home to The Pomeroy Family, and soon after the King’s Protector, Edward Symour after ceasing it from the former owners.

Today, the eerie ruins sit upon the rocks where the grand castle once stood, playing home to many ghosts who wander inside it’s crumbling walls. However, the most sinister part of these ancient remains is said to be the dungeons, with a spiralling staircase leading down into complete, mossy darkness. You will not avoid a true feeling of dread upon visiting this magnificent castle

Known to be the number one haunted destination in the UK, Pluckley plays host to at least fifteen known ghosts, including a gypsy woman who drowned in a nearby stream, a highwayman who haunts the trees at Pinnock, a phantom horse and carriage that guides itself through the cobbled street, and The Lady of Rose Court.

Visit today and you can partake in numerous ghost walks, or why not walk the town at your leisure and see for yourself. But beware, it might not be the peaceful weekend retreat you’re after!

Famous for brutal battles, Chillingham Castle is said to be one of the most haunted castles in Britain, spanning all the way back to the 13th century. It’s truly a sight to behold, with gorgeous rooms, grand lake and beautiful fountains. Throughout the centuries the castle’s architectural detail and massive walls have remained unchanged. Unlike many other ancient castles in the UK, this one remains fully intact rather than being left as ruins, and holds Grade 1 star.

Spectres can be found all over the castle, whether they be of the original family, servants and workers who lived in the castle, or those who fought in the famous battles. From the tallest towers to down in the dungeons, ghostly apparitions are said to be spotted by most who visit, whether during the day or at night.

Not only can you visit this castle, but you have the chance to stay in one of its eight apartment rooms, all with their own individual quirks and character. Get the full spooky experience, but probably not for the faint hearted!

It’s not just the infamous Highgate Cemetery that makes Highgate one of the most haunted locations in Britain. Despite many suspected ghosts being reported seen by visitors, and even some caught on camera, Highgate is home to many other haunted locations, making it a spooky hot-spot for visitors to London.

Included in the haunted homesteads includes an 18th century pub, The Flask, where it’s said that the ghost of a Spanish barmaid haunts the cellar. Others claim to have seen a man in Cavalier uniform who crosses the room in the main bar and then vanishes into a pillar.